…or a liberal. Or a capitalist or a socialist.

The One who rode into Jerusalem on a donkey and staggered out of the city carrying a cross is the King whose reign transcends any political affiliations or associations we may hold. The One who rose on Easter Sunday defeated sin and can destroy the barriers that strain the unity of believers who hold to different perspectives.

Believers – people with whom you and I will live for eternity face to face with Jesus in the new heaven and new earth – hold to different political, economic, and social opinions just like I can hold the February 2019 issue of Maclean’s in my hand. That month the editors of Canada’s current

events magazine did an ingenious thing: They created two covers – a “tumble edition,” as they called it. One cover boldly asks, “What’s wrong with the Left?” But then you flip the magazine over and the other cover asks with equal audacity, “What’s wrong with the Right?” As Canada’s federal election looms, the editors’ objective was to “to raise the alarm. Both sides of the spectrum are spoiling for a fight to such an extent that nuance, irony, and reasoned debate are at risk.” Reading forward from both sides allowed me to respectfully listen to cogent arguments from the Right and the Left without flippantly or angrily dismissing them or attacking those “on the other side” with my words or actions. Is this not how Christ would have me behave?

But this goes beyond behavior.

While Christians will likely always identify as Right or Left (or perhaps Centrist), I believe this identification should not be my primary way of identifying or labeling myself. I am a follower of Jesus before I am a conservative or a liberal, before I am Canadian, Romanian, Cambodian, Mexican, Dutch, Liberian, or American. If by the way I think or act I make being a Canadian or anything else more central than being a Christian, I am committing idolatry.

I appreciate how my former teacher at Abbotsford Christian School, Trent De Jong, puts it in an article he wrote for Christian Courier earlier this year:

“…Many Christians believe that being Christian goes hand in hand with being conservative or being liberal. This is plain wrong. If we follow the Jesus of the Bible, we will find ourselves uncomfortable on either end of the spectrum.”

We’re uncomfortable at either pole because we realize that neither are sufficient to completely express who we are in Christ.

Frankly, sometimes my loyalty to Jesus puts me in the Right camp when, for example, it comes to recognizing the intrinsic value of individuals from the womb to the tomb (Psalm 139 and 1 Timothy 5 support this). But sometimes my loyalty to Jesus finds me walking alongside those on the Left who, for example, are often the ones advocating for the foreigner, widow, and orphan (Exodus 22 and Matthew 25 quickly come to mind). Similarly, I personally feel those with a more liberal outlook tend to have a better track record at being good stewards of creation and the environment (texts connecting with this include Genesis 1 as well as Mark 16 with its command for the Gospel to impact all creation) while those on the conservative side often seem to be better stewards of my tax dollar (I haven’t tried connecting specific Bible texts to this before but some suggest Leviticus 25 and 2 Thessalonians 3 imply small government and conservative fiscal policies). Overall, Jesus doesn’t let me pin Him down to any one particular political label; perhaps I should be cautious with such labels for myself and others, too.

I’m not saying you shouldn’t be conservative or liberal. I’m not saying you should switch sides or just sit in the middle. What I am humbly asking is that Christians remember that our primary identity is in Christ. Through Christ, God the Father adopts us into His family, makes us citizens of His eternal Kingdom, and fills us with His Holy Spirit. Christ is King ahead of any president or prime minister, ahead of any political, economic, or social philosophy. 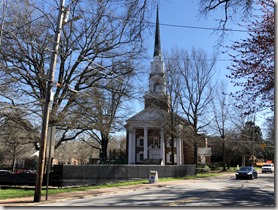 modeling how to live into this. With a membership of around 4,000 in a city and a state that alternates between voting red and blue, White Memorial Church calls itself a “purple church.” Instead of taking the easy path of finding a church where they can worship only with people just like them, the members take the harder route of seeking community (and civility) within their diversity. And the media noticed.

This Spirit-enabled willingness to listen to and love those who are “other” than you and me demonstrates and strengthens our identity and unity in the crucified and risen Christ. This transcends political, economic, and social labels. It’s how Jesus calls you and me to live. And it’s appealing both for Jesus’ disciples and for people watching us from outside the church.

This piece from NPR gives practical tips about talking politics
with civility: “Keeping It Civil: How To Talk Politics
Without Letting Things Turn Ugly”
–

5 thoughts on “Jesus is not a conservative”