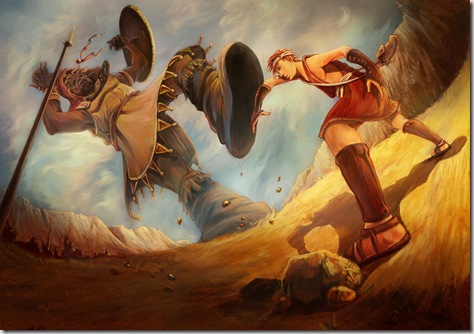 Granted, Goliath’s strength appears unmatched at first glance. Anyone with eyes can see he’ll handily defeat the Israelites without even breaking a sweat and still be home in plenty of time for lunch, right?

In his book David and Goliath: Underdogs, Misfits, and the Art of

Battling Giants, Malcolm Gladwell explores a different perspective and proposes that Goliath is not the mighty warrior everyone thinks he is. Yes, his size is intimidating, but there are some puzzling things about Goliath that suggest he’s not the invincible threat Saul and his army take him to be.

For example, why does Goliath need a shield bearer? In ancient times, archers needed attendants to carry their shields as they needed both hands to use their bow and arrow. Goliath, however, does not have a bow and arrow in his arsenal. He proposes that the Israelite-Philistine conflict be settled by a duel between one man from both sides in which he plans to use his huge spear. So why does he need a shield bearer?

What’s more, why does Goliath tell David to “come here?” Instead of wanting the upper hand and taking the offensive, he waits for his enemy to approach him. What’s more, the Bible describes David running quickly toward the battle line; Goliath seems to move slower. If he is such a mighty warrior, why isn’t he also running quickly into battle, taking charge?

Finally, why does Goliath make the strange comment about David coming at him with sticks? The Bible says that David takes into battle his shepherd staff, pouch and sling. David is only holding onto one staff, but Goliath speaks of multiple sticks. Why doesn’t he describe more accurately the scene unfolding right in front of him?

What many medical experts now believe … is that Goliath had a serious medical condition. He looks and sounds like someone suffering from what is called acromegaly – a disease caused by a benign tumor of the pituitary gland. The tumor causes an overproduction of human growth hormone… And furthermore, one of the common side effects of acromegaly is vision problems. Pituitary tumors can grow to the point where they compress the nerves leading to the eyes, with the result that people with acromegaly often suffer from severely restricted sight and diplopia, or double vision. (p. 14)

So Goliath’s “shield bearer” may actually be his visual guide. If he moves slowly, it’s because he sees everything blurry. His double vision makes it appear David is carrying two sticks instead of a single staff. And he has to tell David to “come here” because his vision is too poor to otherwise locate him!

The Israelites only see an intimidating giant. With eyes of faith, David sees a bigger picture. Perhaps he perceives how Goliath’s size is also the source of his greatest weakness and takes advantage of that. Combine that with his trust in the God who has prepared him for this encounter, and David’s odds of winning this battle are suddenly infinitely greater than Goliath’s.

I suspect a lot of the “giants” that intimidate me are not entirely what they appear to be. God invites me to trust Him in life’s challenges and develop a God-shaped imagination. He fills me with courage that helps me see how the biggest problems are, in reality, miniscule compared to His might in which He welcomes me to also find strength.
–

2 thoughts on “When a giant is not such a giant”