The story of David fighting and defeating Goliath is probably the most well-known of all the stories about David. It is an important reminder 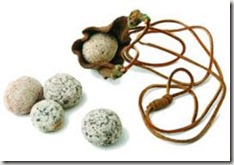 that God is in the giant-defeating business when those giants stand opposed to His plans. And it has inspired many underdogs to press on against a stronger foe.

But skeptics have asked: “Could a boy really have killed a mighty warrior with just a sling and stone? Does the author of 1 Samuel exaggerate what happened that day?”

In his book David and Goliath: Underdogs, Misfits, and the Art of Battling Giants, Malcolm Gladwell provides this research:

Eitan Hirsch, a ballistics expert with the Israeli Defense Forces, recently did a series of calculations showing that a typical-size stone hurled by an expert slinger at a distance of 35 meters would have hit Goliath’s head with a velocity of 34 meters per second [~75 mph or ~120 km/h] – more than enough to penetrate his skull and render him unconscious or dead. In terms of stopping power, that is equivalent to a fair-size modern handgun. (p. 11)

In layperson’s terms, David’s stone has some serious speed behind it!

While Gladwell examines the velocity of a rock being propelled by a sling, an episode of Ancient Discoveries on the History Channel examines the force of that rock. An expert suggests that an impact of a stone to one’s head at 3,000 newtons would be enough to kill a human being: A shockwave would go through the brain, damaging the brain tissue and causing death. A slinger then comes on the show and, using a sling and stone just like David’s, hits a target with a sensor that records the force of impact being at 3,600 newtons – deadly!

–
God has given David talent with a sling and stone. With it, he has defended his sheep from bears and lions wanting to devour them. God has prepared David in advance to now use his talent against an enemy that seeks to devour God’s people.

King Saul cannot perceive strength within David so he tries to fit David with his armor. But it is too big and cumbersome for David. Saul figures David needs greater size and weight to be successful against the fearsome giant. But David already has a secret weapon – his sling, yes, but even more critically, God Himself: “You come against me with sword and spear and javelin,” announces David to Goliath, “but I come against you in the name of the Lord Almighty.”

This is the God who has been preparing David for this moment and in whom victory is assured against God-defying giants to this day. As William C. De Vries writes in his Bible study guide on David,

God will use His people with both their weaknesses and their skills [with a sling or a hammer, a football or a computer] to declare His glory and to work out His purpose in this world. (p. 23)
–