This past Sunday evening at Trinity CRC, I spoke about the time Jesus’ disciples discovered they could not exorcise a demon out of a boy no matter how hard they tried. So the boy’s father pleads with Jesus Himself to help, and Jesus promptly “rebukes the impure spirit,” sending it on its shrieking way.

Afterwards the disciples ask Jesus why they were unable to deal with the situation and Jesus replies, “This kind can come out only by prayer.” The funny thing is that nowhere in this particular

Thinking about this, one of my favorite authors, Mark Buchanan, writes in Your God Is Too Safe:

My temptation is to say, “Well, it’s different for Jesus. He’s God incarnate. He doesn’t need to pray to cast out demons.”

But that’s the wrong answer. Jesus became fully human. He emptied Himself, humbled Himself, became a man, a servant. He was made like us in every way in order that He might completely understand our condition, with all our frailty and temptation and limitation.

No, the correct answer is that Jesus does not need to pray at this moment because He has already a well-established discipline of prayer. Mark 1:35 is typical: “Very early in the morning, while it was still dark, Jesus got up, left the house, and went off to a solitary place, where He prayed.”

Granted, there are other occasions when Jesus pauses to offer a prayer before performing a might deed. Stopping to intentionally pray about something is not a bad practice.

Nevertheless, Jesus also demonstrates how prayer is not a technique to be mastered, but a way of life. Prayer is not merely a pious exercise, but the “complete dependence on God from which sincere prayer springs” (to quote C.E.B. Cranfield’s commentary on Mark’s Gospel). Jonathan Edwards is attributed to saying, “Prayer is as natural an expression of faith as breathing is of life.” 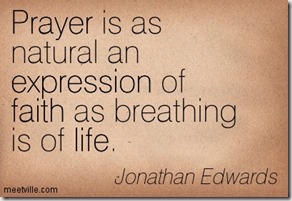 that it was a great delusion to think that the times of prayer ought to differ from other times… His prayer was nothing else but a sense of the presence of God, his soul being at that time insensible to everything but divine love. And … when the appointed times of prayer were past, he found no difference, because he still continued with God, praising and blessing Him with all his might, so that he passed his life in continual joy.
—————————- (The Practice of the Presence of God, p. 26)

I’m encouraged to know where that kind of joy can be found.
–