After a couple weeks of vacation and a week of Vacation Bible School – the fun “Kingdom Rock” where kids stand strong for God – I’m blogging again.

Part of our family’s vacation time was spent at Newton Hills State Park in South Dakota. While there, we met another family, the dad who happened to be a biology instructor at the University of South Dakota. Going for a hike together was very insightful as he described the various species of flora and fauna. A definite highlight was discovering a skink in the grass at the end of our hike through a section of the Woodland Trail. Monica’s dad was the first to spot it, thinking it was a slithering snake. But snakes don’t have legs! 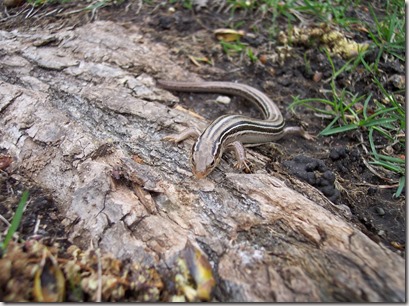 Our biologist friend quickly identified it as a skink and noted that sightings of these little striped creatures are rare as they are very secretive and like to hide camouflaged in the undergrowth. Apparently if a predator finds and grabs it by its tail, it can shed its tail and grow a new one. Wikipedia reports that a small isolated population of skinks lives in Manitoba – the only lizard native to that province and one of only five lizard species who make their home in Canada.

I’m glad Dad spotted the little fella so we could observe it for a few moments, appreciating its intricacy and being reminded of how so often cool things come in small packages. Keepin’ my eyes open for the small stuff today…