I’ve often felt similarities between Advent and Lent that go beyond liturgical colors (both make purple prominent). Both seasons lead up to 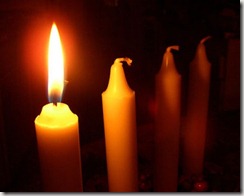 a special holiday (holy day) in the church year, giving each a sense of expectancy. In different ways, each prompt to examine our hearts and lives in light of Jesus – specifically His arrival or His death.

The other day I read something by Jeff Munroe of Western Theological Seminary that highlighted even more similarities between the two seasons, as well as the paradoxes present in each. It deepened my appreciation for the current church season…

If you attend a liturgical church [this month], you will notice that the color of the paraments – including the stole the minister wears and any hanging adornments to the pulpit or Communion table – will be purple. It is the first Sunday of Advent, which marks the beginning of a new year on the church calendar, and purple is the color of Advent. While the world anticipates Christmas in red and green, the church uses purple, the same color used during the season of Lent.

Just as Lent is paradoxical because it anticipates both the death and resurrection of Jesus, Advent is paradoxical because it anticipates both the birth and death of Jesus. Some have seen the cross foreshadowed in the wood of the manger and the linen shroud in the swaddling clothes. As with any birth there was blood, the essence of life, when Jesus was born. There would be blood again in the Garden of Gethsemane and finally on the cross at Calvary.

Photo by Per Ola Wiberg (Powi) from Free Stock Photos.
–

One thought on “Advent and Lent: Paradoxical seasons”