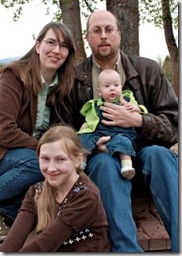 Today’s post is by Rick Apperson. Rick and his wife Sarah are friends and colleagues who are missionaries living in the Bulkley Valley. Rick works with the Salvation Army and pastors Main Street Christian Fellowship in Smithers. He plays a good game of Settlers of Catan and blogs at Just a Thought.
–

The man was dirty. He reeked of alcohol. His appearance was the very epitome of a homeless person. His language was rough and yet, in mere moments, he preached a Gospel message that had everyone in tears.

We were well into worship on a Sunday morning when he walked in. He took a seat and then bounced up to get some water. He sat down and bounced up again looking for a snack. A third time he stood up because he had soiled himself. All this before I even started my message.

I believe I was preaching on love that day. Really, I can’t remember.

What I remember is that in the middle of my message, this man asked if he could say something. After I said yes, he began to talk about love, our need for God, and how we should love our neighbours. He talked about making mistakes and taking baby steps to Christ. He didn’t talk long, but he impacted the whole congregation. As people wiped their eyes, I sat stunned that this man whom I had known for years as a “street person” had just articulated the heart of the Gospel. I was humbled.

God has a way of doing that. He has a way of using people you would least expect to express the basic truths of the Word of God.

One lady had sat in our congregation for a few months. She is a very sweet woman and one who is considered “special needs.” After sitting in our services for some time, she came one morning and handed my wife a piece of paper. (She likes to write letters to communicate.) What she had written were two very beautiful, heartfelt worship songs. It was a very real reflection of a child like faith.

These were two very different people, both of whom had me turning to the Father in worship!

It reminds me of the story of Rahab the prostitute found in Joshua 2. Rahab hides two Jewish spies as they check out Jericho in advance of the Israelite army. As they are being hunted, she helps them escape. She also expresses her own belief in God. Her actions are not what you would expect from a prostitute. Yet Hebrews 11:31 lists her as a woman of faith and James 2:25 mentions her good works.

God shows Himself in unexpected places and in the lives of unexpected people. How has He surprised you?
–