NATO has announced it is wrapping up its mission in Afghanistan in 2014.  Canadian troops already began leaving last year, which could suggest things are improving there.  Either that, or our work is too frustratingly ineffective to stay.  What Christians in that part of the world are experiencing reveals that, despite the presence and influence of the Western world, things are getting worse instead of better.

In an open letter to the worldwide church sent in 2010, Afghan Christians plead for our help to stop the Afghan government from arresting Afghan Christians and condemning them to death by public execution.  Two years later, Christians are still suffering under severe persecution from the government’s campaign to brutalize and eliminate followers of Jesus.  In his 14 May 2012 column in Christian Courier, Harry Antonides writes how Afghanistan continues to be one of the world’s “worst religious persecutors,” citing the recent order from the Afghan government to destroy that country’s last remaining church.  Anywhere from 500 to 8,000 Christians in the country worship “underground,” according the April 2012 issue of Decision magazine which focused on “Radical Islam’s Global War on Christians.”

This past March, the Grand Mufti (the senior and most influential Muslim religious and legal authority) of Saudi Arabia, Abdul Aziz al ash-Shaikh, set his sights over the entire Middle East when he declared that it is “necessary to destroy all the churches of the region.”  His interpretation of Islam forbids the co-existence of two religions in the Arabian Peninsula and beyond, thereby justifying the persecution of Christians.

Until the past couple of days, I did not know all this.  I have not seen reports about this on the news, in the Christian websites I frequent, or on Facebook.  Except for Mr. Antonides’s article in Christian Courier that happened to catch my eye as I was glancing through the paper, I had to go hunting to find and confirm details about the suffering of our brothers and sisters in Christ in places like Afghanistan.  Maybe I’m just reading the wrong stuff.  But apparently I’m not the only one.  The open letter from Afghan Christians in 2010 concludes with asking why “the whole world and especially the Global Church is silent and closing their eyes, while thousand of their brothers and sisters (body of Christ) are in pain, facing life danger and death penalty, and 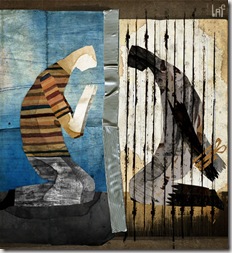 are tortured, persecuted and called criminals because they believe on the Truth.”

Keep going:
> A Muslim’s perspective on the Grand Mufti’s declaration
> Concerned Christians for Afghanistan
> Voice of the Martyrs: Canada and USA
> International Day of Prayer for the Persecuted Church
Prayer graphic from Creed:or:Chaos
–