Dan Dykens is a forest firefighter
who has battled blazes all over BC.
Together with Jennifer and their new
daughter Molly, he has been part of the
Telkwa CRC family for a few years now.
Here he reflects on the same questions
that Mike answered last week…

What is the first thing that comes to mind when I say the name Jesus?
I think mentor, example, and leadership. In the world of firefighting it’s easy to get caught up in man’s idea of leadership, which, a lot of times, is based more on being the “alpha male” instead of the calm, assertive person I believe Jesus was while on earth and is today. I have spent the last 10 years trying to become the type of leader Jesus is – patient, understanding, but motivated, and not afraid to confront things that are out of line or contrary to a larger goal.

What’s the best thing about being a forest firefighter?
The team atmosphere. It’s been interesting for me starting as a 19-year-old crew member and advancing to supervising a 20-person unit crew. The maturing it

takes to become a leader (which is still happening) has kept me on my toes. The physical challenges are continually there, and it’s a great environment to be in when people are accepting those challenges together and motivating each other.

Have you ever been in a situation where you especially sensed God’s presence?
One time last year at the end of a long day on the line, I was walking through camp towards my truck when a firefighter who was a stranger approached me asking where he could find a blanket. I replied that the warehouse should have some if he checked with the fellas working there. He said he had tried, but nobody was there. I could tell he was concerned and I knew it had been cold the last couple nights, but my answer was short and unsympathetic, saying something 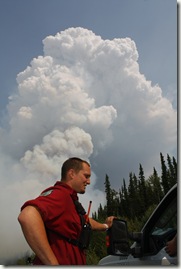 like “Oh well, it’s not my problem.” Shortly after that, I came to my senses.  “Not my problem?” I felt terrible for brushing this guy off, so I went looking for him, but he was gone, and I never saw him again. So I prayed. I prayed that God would give me a chance to make it right, as the words “I was tired and you gave me no place to rest, I was cold and you gave me no blanket, I was hungry and you did not feed me” rang in my head. Sure enough, the next day while travelling home, we stopped at a grocery store to pick up lunch when I was approached by yet another stranger who said he was hungry and couldn’t buy anything to eat. I smiled to myself and thanked God straight away. I bought the man a pile of deli chicken and salads and swore that I would not turn anyone away or brush them off again no matter what I had going on.

Have you been able to share your faith with your colleagues? What’s that been like?
I have shared my faith with a few crewmates, but only in small doses. Religion can bear unsightly connotations and I am careful not to lump myself in with the drum bangers and hypocrites that unfortunately seem to get heard more than the Christians with love in their hearts. I hope to show by my actions that I am a son of God (although I fail in some way each day… I will continue to work at it) rather than just talk around. I know that if I live the right way, the opportunities to talk the right way will show themselves.

What advice would you give someone who’d like to spend their summers fighting forest fires?
Simple: Set yourself up to be as fit, hard working, and positive as you can be. Prepare yourself for long days of physical labour, being away from home, being called upon at any moment to do anything needed, and forgoing some of the amenities you may be used to. Understand that by doing all these things, you enter into a world of people with varying experiences and backgrounds all working towards a goal everyday, and that the adversary changes shapes, presents new challenges, and presses you differently every time you come up against it. The only way to be successful is to work together and stick to the plan… Hmmm… That sounds familiar, don’t you think?