Commenting on my post yesterday about the hurt words can cause, my colleague Rick Apperson reminded me of something in New Testament writer James’ letter:

Everyone should be quick to listen,
slow to speak,
and slow to become angry.  (James 1:19)

James is also the one who compares the tongue to the spark that starts a forest fire.  That analogy is very apt for those of us living in British Columbia where “more than 2000 forest fires have been sparked, stretching firefighting resources and forcing thousands of evacuations,” as CBC reports.  Members of the church I pastor are forest firefighters, so I have heard some firsthand reports of the havoc fires are causing around the province.  Wide swaths of backcountry popular with locals and tourists alike have been reduced to ashen rubble.  Countless hectares of trees and undergrowth have been ravaged, decimating the animals who lived in them.  Families have been forced out of their homes, some returning only to charred remains of what once used to be their house. 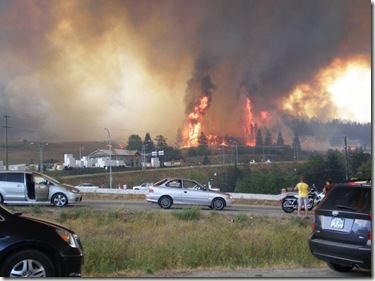 Consider what a great forest is set on fire by a small spark.  The tongue is also a fire, a world of evil among the parts of the body.  It corrupts the whole person, sets the whole course of one’s life on fire, and is itself set on fire by hell.  (James 3:5-6)

No wonder we should think before we speak.